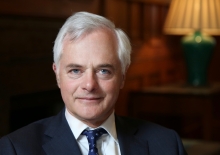 The Hoare family’s involvement in both banking and philanthropy began almost 350 years ago. The two strands were twinned at the very start and remain closely connected today. Our philanthropy began with running a profitable business. By doing so, we were able to help start Westminster Hospital, support injured veterans of the Battle of Waterloo and found an impact investment fund.

The family established the Golden Bottle Trust (GBT) in 1985. It binds together the family diaspora, it increases staff charitable giving and it allows the partners to donate to causes which resonate with them. There have been many successes, particularly with small charities where a small cash injection and some consultancy can go a long way. The GBT has given away £17 million since it was founded and it has built an endowment of £17 million. Non-financial contributions also play an important role. Every partner also gives their time and expertise which is often a more valuable contribution than money alone – it is just more difficult to measure. I find I spend a lot of time each week on things which have little direct relevance to my day job, in the belief that what comes around goes around.

The GBT does a lot of great work, but to have real impact, we need to harness more of our customers as well as staff. At the moment, there are three ways in which we engage with our customers philanthropically: by hosting evening talks; by offering our donor-advised fund; and by facilitating appropriate introductions. Our evening talks are a way of showcasing charities and social enterprises. I have been told countless times by customers that attending these talks changed the course of their philanthropic activities. I once visited a customer in Sri Lanka, a year after the tsunami, and she confided that just giving two talks at the bank had raised enough money to re-build her entire village.

We launched a donor-advised fund, the Master Charitable Trust (MCT) in 2011. Its purpose is to allow customers to give without the administration, cost and time involved in setting up a trust or a foundation. Customers can set up a sub-fund under the MCT umbrella with just three forms, and start to give immediately. There are over 50 giving funds, the largest of which stands at over £10 million, and we have overseen donations of £30 million.

The final strand is the most difficult. We try to listen to our customers and offer introductions and opportunities as they arise. This relies on customers to tell us what they may be interested in and also in a good deal of serendipity, but it is very satisfactory when it transpires.

I like to think that we have done some good in terms of best practice and mobilising money. However, we are small in number. There is a missing opportunity which I am now engaged on and which could change the face of mainstream finance: how the endowment is invested. In 2011, I carved out an allocation of 10% of the GBT endowment and started making social loans, social equity investments and later, venture philanthropy investments. The results were encouraging so the allocation increased to 20%. Good work was being achieved in civil society and we could also see that we would get our money back with a financial return. The return was probably going to be less than the traditional, mainstream markets, but it had a very attractive characteristic: it was uncorrelated with other returns, being predicated by outcomes in schools and hospitals, not the activity of central banks and politicians.

Uncorrelated real returns should find a place in any portfolio. It wasn’t reasonable to increase the GBT exposure much more as the returns would cease to be uncorrelated, so what next?

Eighteen months ago, the GBT entered into a partnership with another charity, Panahpur, and we each contributed between £2–3 million of social investments towards the project: “Project Snowball llp”. Since then, Friends Provident Foundation and a family charity have joined – both at the same level – and another family office joined last month.

Our intention is to scale up our project and eventually list some shares on a recognised exchange. That will give IFAs and wealth managers an answer for their millennial clients who want to invest according to their values. We believe that this will lead to other mainstream institutions following suit and making social investment more readily available to their clients.

The future of philanthropy at the bank

At the moment, we give money and intangibles, harness customers and staff, and are also trying to change wealth management. Project Snowball has enough funds to step up our activities, and at the start of the year we appointed Rennie Hoare as Head of Philanthropy at the bank. Rennie will help staff and customers with their philanthropy, and we also hope that he will help the GBT trustees identify causes where they can have significant impact.

Many are unbothered by philanthropy and social investment, but it’s important to me for various reasons. Firstly, the partners have no financial incentive to make the bank bigger than it is, but we are motivated to generate more profits so that we can make a greater social impact. Secondly, although it is satisfactory to run an ethical bank and pay our taxes, I think more is required. The philanthropy story is part of the bank having a social purpose greater than banking – we want the bank to be a good citizen, as well as good bank. Finally, if we get the expression of our social purpose right, we may manage to continue to recruit millennial customers and staff and carry on the good work!

Download this article as a PDF. This article first appeared in the Philanthropy Imapct Magazine issue 19.