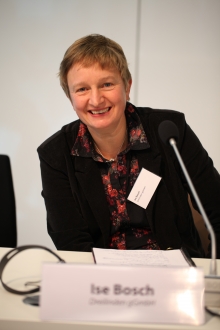 As a human rights funder, unsurprisingly I see human rights relevance everywhere, from antiviolence to xenophobia. So when Dreilinden started in 2007, we joined the new Ariadne Network – European funders for social change and human rights. It became our go-to place for knowledge and connections on human rights and social change grant making.

Since then, I have wondered why Ariadne has had such trouble increasing membership from so many countries on the European continent. Several years into its existence, despite major outreach initiatives, there still is a felt UK and US dominance. It’s not a bad thing, as AngloSaxons know how to create a no-nonsense working atmosphere, and they know how to have fun. But we do miss having more grant-making colleagues from Spain to Poland, from France to Greece. Why does human rights funding not have traction with many continental European funders, especially established ones?

I heard that one reason why they are hesitant is the ‘human rights’ in the network’s title. This came as a surprise to me. Dreilinden got started with a human rights and a social change outlook, reflecting our issue area and values. Name a human rights issue that does not disproportionally affect women and girls! And sexual and gender minorities are of course some of the most endangered groups on earth. Regarding both gender and gender diversity, ‘human rights’ is the obvious ally and used extensively.

In the frame of social change philanthropy, on the other hand, money is a tool for social change, not for charity; generosity is great but not the solution. Solutions are working in solidarity and with shared values – exactly like the ones enshrined in human rights.

Limited vision explains my surprise to find myself in a minority group, even within the world of grantmaking institutions. ‘Human rights’ simply has little traction. I would like to consider and reject one possible explanation for this, and to offer another explanation. First: no, it really cannot be that they are not interested in the values that back human rights:

dignity for all, universal redress, empowerment. Not all philanthropy embraces ‘empowerment of target groups’ as its chosen goal and mode of intervention. Some are about supporting elites and many are about service delivery. Yet, if they strategise at all, and not only implement from project to project, social change analysis comes into play. Human rights are not far from this.

There are lessons to be learned from gender and sexual diversity grant-making and its well-developed human rights lens which I can only sketch here.With all their shortcomings (consider the state of the UN system, the weakness of its courts), human rights values have been taken up by the young, aspiring individuals we seek to support. They don’t usually see themselves as targets for interventions or recipients of aid – they are human rights defenders. For people living precarious lives, and a desire to improve the situation, the promise of human rights is as thrilling as it was in 1945.

Simply put, the rights-based approach has been our shared value base for work, the world over. It enables some cohesion and solidarity across the power-divides between grant makers and grant seekers – or at least a shared language. A human rights approach enables dialogue about the problems that arise in philanthropic interventions.

The legal side of human rights

Could it be that other funders’ response to the term ‘human rights’ rests on very different associations? Not the vision and the values of dignity and equality, but the legal side – litigation. Could it be that at the end of the term ‘human rights’ they put ‘lawyer’? If that were true, it could then be that such funders, consciously or not, foresee their grantees suing the state – which is a problem, because the state is their valuable ally. Human rights would then be a risky thing rather than a promising strategy.

Would a foundation be likely to fund strategies that result in human rights lawsuits or other claims against state agencies? Not very.

However, (again, if my suspicions are correct), funders overlook an important issue here: states are already bound by human rights law. In the past, this played out in the developing world mostly – but recently it is becoming more and more tangible in the West. The disability rights movement and the children’s rights movements exemplify successful adaption of human rights strategies in Western countries. The German government has had to respond to complaints by UN rapporteurs; reports and shadow reports to UN bodies are now part of the landscape for social change interventions. If foundations fear for their good relationships with state partners, they can partner with them to fulfil their human rights obligations. This can be done in a way that is not confrontational – but it needs a good knowledge of the human rights field (issues, developments, players and people).

Actually, I would argue that the understanding of ‘human rights’ as ‘human rights lawsuit’ is not upto-date. Broadly speaking, the meaning of ‘a rightsbased approach’ has taken a full turn from denoting victimhood of state oppression, to any approach where people stand up for themselves. In the global South and also among minorities in the West, human rights are now understood as ‘my rights’ - not the rights of a victim needing protection by a lawyer. The term is used for social interventions that seek to self-empower ‘the grassroots’ or ‘people at the coal face’. It is used to denote grants and investments that enable social upward mobility of members of oppressed groups, looking at them as subjects of action – not looking at the lawyers taking up their case.

Litigation is the smallest part of what is, nowadays, considered ‘human rights work’. There are too few funders in this field so although actual cases are not so expensive, much patience is needed in waiting for suitable ones. The field also needs much larger volumes of funding to build up support: educating lawyers and (even more difficult) judges; victim protection; and improving public opinion on culturally sensitive subjects.

Taking a broader approach, human rights lie in the middle of social change. It is not the concern of all funders, of course, but, it is for those funders who care for their lasting social impact. Some of the most longranging, grant-making strategy is found in this arena.

To express this wider connotation of human rights, Ariadne has since lengthened its name from just ‘human rights’ to include ‘social change’. If you fear that your state partners would eye this association with suspicion, communicate that you want to partner with them in their efforts to fulfil their human rights requirements. Don’t fund strategic litigation if you don’t want to file it under ‘democracy promotion’; speak of ‘human dignity’ rather than ‘rights’ if that is easier for your organisation – they are the same thing. Do consider if human rights language might bring your organisation closer to your grant seekers. Be there for one of civilisation’s greatest achievements – human rights – and for some of the best grant-makers’ networks and conferences.

This article first appeared in Philanthropy Impact Magazine issue 15. Download this article as a PDF.