Many fundraisers tell us that donors give more if a match is available, that is, somebody else will also give if, and only if, they give.  Fundraisers’ confidence is based largely on anecdote and imprecise comparisons. Happily there is now a growing – if still small – body of solid evidence about whether matches really work, and whether they are really a fundraiser’s best friend.

An early experiment found that matching does increase giving – at least in the US. In 2005 Dean Karlan and John List, economists at Yale and Chicago respectively, ran an experiment in which over 50,000 donors to a USA civil liberties NGO were randomly assigned to receive one of several versions of fundraising letter. One group received a letter without mention of a match. The other groups’ letters all (truthfully) offered different matches: some donors were offered a straightforward match of $1 for each $1 given; other donors were offered a larger match ($2 for every $1 given); and, other donors were offered an even larger match ($3 for every £1 given).

The match offers worked. Karlan and List found that offering a match increased the probability that each recipient would give by 19%, and that the average gift increased by 22%. Pretty impressive gains, but then the surprises start.

The level of the match does not matter. Donors were no more likely to give, nor to give more, if offered at 2:1 or 3:1 match than if the donor was offered a 1:1 match. [This is pretty interesting in relation to debates about tax breaks for giving. Gift Aid is essentially a match provided by the tax-payer, and people often claim that the level of tax relief affects the level and number of gifts.] 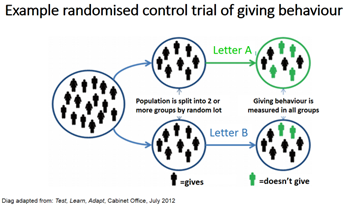 Matching can make it worse

In Germany, matching seems to reduce a fundraisers’ success. Steffan Huck and Imran Rasul of University College London sent various different types of letters to over 22,500 patrons of the Bavarian State Opera House in Munich asking for donations. The ‘vanilla’ letter gathered an average donation of €74.30, but recipients of a letter which, again truthfully said that a major donor would increase any donation by €20 gave only €69.20. [Technically this is a leverage, not a match, but the ideas are very similar.] Huck and Rasul also found that increasing the level of a match does not help, though their results were even more stark than the those of American researchers’: donors offered a 50% match (that is,  50¢ for every € given) gave on average €101, whereas donors offered a 100% match gave only €92.30. The response rates for the two groups were identical, at 4.2%.

So if a major donor is interested in encouraging other donors, what beyond matching might a charity ask them to do?

Unsexy, but effective, a charity might use the funds simply to ask potential supporters again.  This is described in a different experiment also with the Bavarian State Opera House. In this experiment, Huck and Rasul found that of donors who were asked once, not one donor gave again several weeks later, but when they were asked again (within a six week period) 1.6% of donors gave again. Of the 22,500 recipients, that is 360 people.

The charity could also use the money to enclose a pre-filled bank transfer form.  Huck and Rasul tested this and found that including a pre-filled form more than doubled the number of donors who gave.

The Charity could also create a newsletter, in which all donors are listed against the level of  their donation. In an experiment in the US (this trick might not work elsewhere), Dean Karlan and Margaret McConnell found that including in the asking letter the possibility of having the gift recognised in this way increased the probability of recipients giving by 2.7 percentage points.

Big gains seem to come from offering a match only for fairly large donations. In one of the opera house experiments, some patrons were offered a match only if their gift was above €50. They then gave on average €97.90. This is somewhat irrational if you think about it, because patrons whose letter offered no match gave on average of €74.30, which implies that most patrons would not have needed to increase their gift to qualify for the match.

However, the lesson is not to suggest large amounts. A new study by Huck, Rasul and Maja Adena of Berlin’s Science Centre for Social Progress found that suggesting donations of €100 and €200 does increase the average size of donation, but reduces the number of them, making the net effect virtually nil.

Socialise with the big and famous

The biggest gains of all seem to be from donors wanting to emulate leading donors.  One device increased opera patrons’ gifts by over 75%.  The letter to donors asking for support simply stated  that an anonymous donor had already committed €60,000. This is somewhat surprising: the response was  more than 400 times the average donation, so most donors are not simply copying the major donor. The researchers think that a large gift is a quality signal: the donor must have done his or her homework before making such a commitment.

Another experiment by Karlan and List supports this. A poverty-reduction charity sent donation request letters to two groups of donors stating that a donor would match donations. One group received a letter which described an anonymous donation, whereas the other groups’ letters identified the donor as the Gates Foundation. Citing the Gates Foundation generated more and larger donations, presumably because it is more salient and memorable to donors and hence a stronger quality signal. The implication of this for fundraisers is to try to get your match from somebody known and credible, and willing to be identified.

Method in the madness

All of these results come from experiments in which the NGOs or opera houses were sending fundraising requests to their existing donor databases. The researchers simply worked with the organisations to create various types of letter, to randomly determine which donors got which type of letter, and then to track the results. That is, they are all randomised control trials, all with decent sample sizes. They were all inexpensive to implement, and yet they provide evidence which is not subjective, is not anecdotal but is reliable. Good fundraisers track their response rates, so testing  fundraising activities  in this way is fertile ground for generating many more rigorous and useful insights.