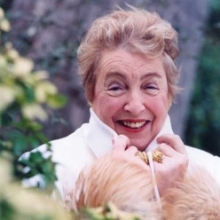 Personal story
Dame Stephanie (Steve) Shirley is an entrepreneur. She started an early business technology group on her dining room table with £6 in 1962. In 25 years as its Chief Executive, she developed the company, now part of SopraSteria, into a FTSE 250 leading technology group, which has pioneered new working practices and changed the position of professional women - especially in hi-tech - along the way.
Since retiring as honorary Life President in 1993, Dame Stephanie has increasingly devoted her time to philanthropy. Having arrived in the UK in 1939 as an unaccompanied child refugee from Germany, she explains, "my personal history is the main reason why I give. As a refugee, I need to justify the fact that my life was saved while so many others were lost. I've been the recipient of charity and have been sensitised to issues in a way that people who have always had enough money - not to be hungry anyway - find hard to imagine".
Dame Stephanie defines giving as a social and cultural activity as much as a financial transaction: "Money alone is seldom the answer. It can be a compassionate act of detachment, but I try to make it a committed act of love". To ensure that her money has an impact - that she can truly make a difference - she also gets personally involved: "I never, ever, just write a cheque, I use my business and entrepreneurial skills, along with my wealth, to do the things that I'm good at. I pioneer new projects, projects that wouldn't otherwise happen and that, if successful, make a real difference". To be strategic and pioneering, she willingly takes risks, accepting that some projects might fail: "If we had 100% success, then I'd reckon we were not taking enough risk and doing the difficult, unpopular things."
"I never, ever, just write a cheque, I use my business and entrepreneurial skills, along with my wealth, to do the things that I'm good at."
Motivated by her own experiences, Dame Stephanie focuses her giving in the two fields she knows and cares most about - information technology, her chosen discipline, and autism, her late son's condition. The Shirley Foundation, which ranks among the top 50 grant-giving foundations in the UK, has in the last seven years awarded more than £50 million in grants to charitable causes. She provided £10 million for the establishment of the Oxford Internet Institute at Balliol College, which is the world's first truly multi-disciplinary Internet institute based in a major university. Her current focus is on medical research into autism.
The Foundation also supports other autism-linked charities, such as Autismconnect, the first web user community dealing with disability issues, and Prior's Court School, established in 1998 and inspired by a visit to a centre for autistic children in the US that uses a holistic development approach, including physical education, with great results.
In the 1980s, Dame Stephanie and her husband set up Autism at Kingwood to help meet the needs of her son. Realising that the Trust could also provide for other people with disabilities, she set up additional support homes, which today care for more than 150 adults with autism.
As an avid philanthropist, she is also interested in shaping a more professional charity sector: "I believe this sector is moving from 'amateur do-gooder' to a more professional field. The tactical giving - here and there - is very inefficient. Though I respect the choices people make for giving, I think there is a lot to learn from the experiences of the United States, where citizens have a sense of gratitude and of giving back to society."
Dame Stephanie receives an enormous amount of satisfaction from giving: "I enjoy working with young people. We are all children of society and so should give something back to the world our children will live in. Giving is my lifestyle, and not altruistic at all in that I get so much in return". As an entrepreneur, a pioneer, and a philanthropist, Dame Stephanie concludes that "a large bank balance is all very nice, but like the 16th Century philosopher Francis Bacon, I believe that 'money is like muck, not good except it be spread.'"