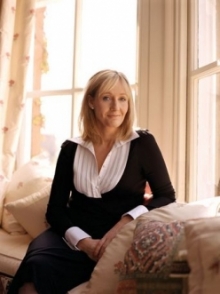 The year 2000 marked a turning point for J.K. Rowling,  who now uses both fame and fortune in her philanthropy, choosing challenging, and often neglected causes that will benefit most from the enhanced media profile her support brings.. Before this time J.K. Rowling remained relatively anonymous, rarely giving interviews and keeping any cause she supported as far away from press interest as she could possibly manage.

Perhaps she got fed up of her rags-to-riches story of single-motherhood-on-benefits-in-Edinburgh being rehashed in the first paragraph of any profile of her – she described it as feeling like she had ‘penniless, divorced, lone parent’ tattooed on her head – and decided that if it was going to follow her around, then she would use her status as the most famous single mother in Britain to become the Ambassador and then the President of the National Council for One-Parent Families, now Gingerbread.

In 2000, Rowling established the Volant Charitable Trust, which uses its annual budget to combat poverty and social inequality, with a particular emphasis on women and children. Volant also funds major disaster appeals as the focus of the Trust's international support.

It’s much easier for certain sections of society to say. "You’ve brought this on yourself by your fecklessness; you sort it out," than to say "You’ve been a victim of circumstances" or "Hey, marriages break up…..but how are we going to help you help yourself?"

Her philanthropy is now unabashedly visible and involved. For example,  two books written for Comic Relief – Fantastic Beasts and Where to Find Them and Quidditch Through the Ages – have gone on to raise £15.7m for the fund. Rowling has said that “You have a moral responsibility when you’ve been given far more than you need, to do wise things with it and give intelligently”. Rather than passively signing large cheques, she involves herself not only in the organisation of her own charities but also in well-publicised events (such as a reading with Stephen King and John Irving in New York to raise money for AIDS and ‘Medicine Without Borders’), that increase the public and media profile of the cause she is supporting as well as raising substantial amounts of money.

In the last couple of years, Rowling has been almost hyper-active in her giving of her time, money and her celebrity status.  In 2006, she contributed a substantial sum towards the creation of a new Centre for Regenerative Medicine at Edinburgh University – her mother died of multiple sclerosis - and hosted a fund-raising ball with her anaesthetist husband to mark the twelfth anniversary of her mother’s death.

In the same year, Rowling went to Bucharest to highlight the use of child institutions in the region and raise support for the Children’s High-Level Group (CHLG), which was founded by her and MEP Emma Nicholson. In 2010, CHLG became Lumos Foundation which now works globally to end the institutionalisation of children, a little-known issue that affects 8 million children around the world, most who have parents but are placed in orphanages and institutions through poverty, disability, conflict and crisis. To support Lumos, Rowling auctioned one of seven handwritten and illustrated copies of The Tales of Beedle the Bard, a collection of wizarding fairy tales alluded to in Harry Potter and the Deathly Hallows, the final book of the Harry Potter series, and raised £1.95m for the charity.  In addition, in 2015, her Harvard commencement speech from 2008 Very Good Lives was released in book form with proceeds of the sales going to support Lumos' work

After the bid, she said, “Large amounts of wealth bring a certain responsibility if you’re any kind of human being, then after you fulfil your family’s needs, you think, well how do I do some good with this?”

Rowling has also supported the Multiple Sclerosis Society Scotland for many years. As well as donating money, she hosted events, lobbied politicians, wrote articles and gave interviews to raise awareness of the disease. In 2010, Rowling made a substantial donation to found The Anne Rowling Regenerative Neurology Clinic at Edinburgh University in memory of her mother who suffered from Multiple Sclerosis. It will carry out major research into MS and other degenerative neurological conditions.