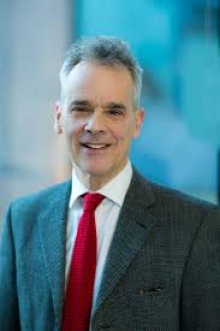 Personal story
Nat Sloane was born and brought up in Cleveland, Ohio a mid-sized US city he describes as suffering from the mid-20thcentury decline in heavy industry.  He credits his artist mother’s contempt for her brothers as ensuring he grew up in an environment where caring about the broader society was expected – the successful uncles’ pursuit of spending their wealth primarily on themselves was pointedly damned as a “failure of imagination”!  His father, an entrepreneur, also spent time most weekends mentoring through Big Brothers of America.  This volunteering spirit Nat has noticed is much less apparent amongst the upper-middle class circles he moves in the UK but more about that later.
Moving from university to grad school and then commercial banking, in 1985 the Sloane family moved to London while Nat was with Bain before he set up his own independent consultancy business three years later.  However it was after he had joined Accenture in the late 90s helping to establish their venture capital business that he started to give significant time to philanthropy, becoming a trustee of Crime Concern (now part of Catch 22) and then joining the board of the Accenture Charity Foundation.
In 2002 when Accenture sold the venture capital business he had helped set up, Nat decided it was time to do something different. He had noticed that commercial boards were always focusing on strengthening the core business but at every charity meeting he attended, organisations were being constantly pushed to do new things.  He was intrigued by these contradictions and wanted to see if he could put use his commercial skills to address some of the challenges the charity sector faced.
Things moved fast: meeting Stephen Dawson led to the establishment of the venture philanthropy TRUST, Impetus, where the discipline of the venture capital/private equity world was brought to bear on the charity sector.  Backing leadership teams and business plans became an essential ingredient of Impetus’s work and was something new for the sector to embrace. Nat soon became involved in Bridges Social Enterprise Fund and social finance – key players in the nascent social investment movement which then led to the Peterborough Social Impact Bond, the first of its kind.
Neither Impetus nor the Peterborough SIB have been replicated as quickly nor as widely as expected, to the disappointment of their founders, but Nat calls himself a “persistent realist” and urges patience.  Both models are intensive and expensive and have required a degree of longevity that the funding sector is taking a while to adopt.  Founding Social and Sustainable Capital in 2013 alongside his role as Chair of the England Committee for the National Lottery Community   Fund, Nat showed once again, his appetite for testing new innovations in order to solve society’s problems and make sure organisations have access to finance that is fit for purpose.
After six tough years, the growth of the social investment market is slower than so many had hoped but Nat is neither entirely hopeful nor despondent.  Impact investing is a good thing but the market is currently experiencing a major exercise in expectation setting.  Transactions are small and the costs are too high but this can change.
What Nat sees as fundamental to creating success stories in civil society is accepting that local context is incredibly important and national scaling of solutions works in very few instances.  We must concentrate on how to disseminate effective solutions and get new practices adopted – something integral to the work of the Education Endowment Fund as it battles to break the link between family income and educational achievement.  Embracing co-production is essential to success not least because the whole sector is currently operating in recession/depression conditions.  Nat is extremely sympathetic to all those who are trying to run organisations: “It is a pretty harsh environment and it is wearing on people working in this space.” Decision makers and those setting the agenda must not lose sight of this as it is unlikely pressures on resources will be eased any time soon.
It is a pretty harsh environment and it is wearing on people working in this space
Working together is a theme Nat returns to frequently – both as a driver for effective solutions but also as a way to ensure we feel connected as citizens.  With the imbalance of wealth and depravation that exists in the UK and social mobility stalled he argues that these connections are vital to counteract feelings of victimisation.  So, to his call to action: more people must get involved with time, treasure and talent. As a society we must inculcate the values of being a good neighbour into our children but also our wider networks.  He would “like to make a difference” and is proud of everything he modestly says he has co-produced but ultimately, he hopes that he might have been able to create a change that will be able to outlast him.
I’ve met a number of major UK philanthropists and I am beginning to recognise a type.  These aren’t the sorts of individuals who are naming buildings after themselves, although some also do.  These are people driven by a genuine interest in the wider world, they give money but they give a whole lot more by giving their time alongside. I’m not sure the UK is the best country at feting these individuals but we must because we need more of them.

Mary Rose Gunn is Chief Executive of The Fore and its umbrella organisation, The Bulldog Trust. Launch in March 2017, The Fore is a new venture-capital style grant fund for small charities and social enterprises with a mission to inject innovation and dynamism into the charity sector. As CEO of The Bulldog Trust, Mary Rose has also run Two Temple Place, the extraordinary historic mansion on the Embankment and headquarters of the trust since 2007.

Mary Rose designed and developed The Fore’s innovative funding model and Engaging Experience network which enable small, early-stage charities to access exceptional expertise, pro bono support and funding. The Fore has made 75 grants and distributed over £2m funding in its first 2 years of operations.   Alongside these activities, in 2011 Mary Rose created the Winter Exhibition Programme at Two Temple Place. Now in its eighth year the programme’s annual exhibitions, supported by partners including the Arts Council England, provide a showcase for museum and gallery collections based outside London and have welcomed over 280,000 people.

Mary Rose has a degree in Modern History from Lincoln College, Oxford and previously worked in roles in media and politics.  She sits on the Board of Margaret Pyke Trust, is an alumni of Women of the Year, a Fellow of the Royal Society of Arts and in 2018 was named as one of NatWest WISE100 leading Women in Social Enterprise.