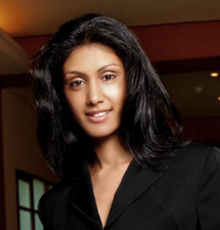 Personal story
Roshni Nadar Malhotra is CEO of HCL Corporation, a $6.5 billion leading technology and healthcare and enterprise) and a trustee of the Shiv Nadar Foundation. Founded in 1994 by her father, the foundation focuses on establishing world class educational institutions that are accessible for all levels of Indian society. Roshni has been named Young Philanthropist of the Year by NDTV and says that while she could support the well-established family enterprise into the next generation, the foundation presented opportunities beyond traditional philanthropy – she sees it as a ground-up social venture support future leaders.
In today’s increasingly fragile socio-economic ecosystem, education is a powerful medium for enabling inclusive, transformational and sustainable change
Philanthropy in India
Roshni explains that philanthropy in India is often based on mass-based interventions and programme-based approaches. While the economy remained closed until the 1990s, this has meant that many potential philanthropists in the country were still building their wealth until recently.

“Philanthropy as a concept only came into being in the 2000s”

Her father began his philanthropic activities in his fifties, but was inspired by the Rockefeller and the Carnegie families to take a longer-term approach to his giving. Though the traditional areas of healthcare and education are important causes, organisations across the country ‘tend to focus on measurable yardsticks’ of their reach, but they fail to address the need for infrastructure and institutions to support development. The Nadar family believe that the two approaches need to coexist to have the most effective impact in the areas of India that remain undeveloped.
The Nadar family believe that ‘in today’s increasingly fragile socio-economic ecosystem, education is a powerful medium for enabling inclusive, transformational and sustainable change India’.  Roshni believes that there is a huge mass of talent that is currently lying untouched and untapped.
The Shiv Nadar Foundation has founded and supports the SSN Institutions, the oldest of which is one of India’s top engineering schools, SSN College of Engineering. The aim of the foundation is to establish world-class educational institutions and centres of excellence to train future leaders – both nationally and globally. Its other schools include VidyaGyan and Shiv Nadar University, bringing elite education to rural areas.
The family foundation is financed privately and shares some structures with HCL, namely to provide a level of transparency and corporate support to the organisation. The foundation’s annual report says the foundation plans to spend $1 billion, a large proportion of which will be spent on infrastructure. The foundation also works closely with government to leverage existing manpower: ‘no organisation in the country has better manpower or better logistical capability’.

“Corporate structure can support the transparency of a foundation”

“We’ve seen a lot of leaders coming from the 400-500 million people living in urban areas, but a lot of India is still very rural”. Though the goal is for the reach the whole of the country, work is mostly carried out in Pradesh, where HCL is located. “These are huge investments – we need to produce certain results before we invest pan-India”
Looking for long-term results
The alumni of the SSN Institutions are a huge asset: students can end up working all across the world and create a better life for themselves though ‘We don’t want our alumni to fly the nest and forget where they came from’. Roshni has seen alumni supporting children in their own villages or in primary schools, there are professional opportunities in rural India as the towns are ‘bursting at the seams’. A social entrepreneur in her own right, Roshni explains that entrepreneurs drive an economy and this spirit needs to be ingrained in the future leaders they are training. “It’s a message we spread to our students”
Besides the obvious challenges of running a rural residential school, Roshni also regrets there is a dearth of good people in Indian academia willing to take up these opportunities. “Partners need to understand these are not quick results”. She explains that schools take up to a 100 years to build up a world class recognition, the family will eventually take a step back from the organisations, but admits it will take 20-30 years to put them in a position where they can say ‘we’re bringing up a leader for India’.

“You’re investing in the future of a child, a future leader”

The foundation has a long time horizon, but when students graduate from SSN they also receive certificates from Carnegie Mellon. Roshni explains the students admitted to the school are academically brilliant, coming from the top of the bottom of the pyramid. She explains leavers go on to do amazing things,  “you’re investing in the future of a child, a future leader”.
Roshni Nadar is CEO of HCL Corporation and a Trustee of the Shiv Nadar Foundation. She has studied and worked in UK and USA, graduating with an MBA on Social Enterprise Management & Strategy from Kellogg School of Management. In 2014 her father, Shiv Nadar, was awarded the Golden Peacock Award for Social Leadership and was named Outstanding Philanthropist of the Year by Forbes India.