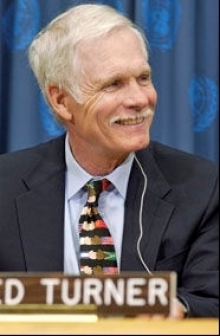 “...every morning brought a noble chance,  And every chance brought out a noble knight.”

Writing a $1bn cheque to set up the Foundation in 1998 “was the best decision I ever made,” says Turner. The CNN founder, who was worth about $3bn at the time of the gift, originally intended to give the money to the United Nations, to ‘compensate’ for the United States then being about $1bn in arrears in its dues. However at the time the UN could not accept donations from private individuals or companies, only nation states.

Instead, Turner set up a foundation to fund causes in parallel with UN priorities. “The UN is vital to the future of humanity,” Turner told Philanthropy UK. “We would not have made it through the Cold War without it. We need an international body where countries can work out differences and collaborate to find global solutions to global problems.”

Turner originally envisioned the foundation as a project that would sunset after 10 years.  He explained, “This was a new model so we did not know what to expect.  We were like Columbus – we started without knowing where we were going; we just knew we were going on a voyage.”

The Foundation had an auspicious start: Kofi Annan, then UN Secretary General, gave the Foundation approval to use the United Nations name. “They trusted us, and I think, over the last 10 years, we have succeeded in earning that trust,” Turner reflected.  Indeed, not only was the Foundation pivotal in leveraging an additional $1bn in donations for UN priority causes, but also it established an effective partnership model working with the UN as well as a range of charities, campaigns and government programmes on a global basis. In response the UN established an Office for Partnerships to engage directly, for the first time, with NGOs and private sector organisations.

Over the last ten years, the Foundation has established an effective platform linking charities, foundations, businesses and private individuals to the work of the UN, and has played an especially crucial role for smaller charities and businesses which typically do not have the resources to work directly with large multi-national institutions.  For example, the Foundation has harnessed business expertise, such as marketing and supply chain management, to strengthen health systems and improve humanitarian relief operations. In its first 10 years, the Foundation developed a health data systems programme for the World Health Organisation (WHO) and expanded it to 25 countries. It also created an emergency response ICT (information and communications technology) training system, doubling the number of certified emergency ICT leaders throughout the UN system.

“This was a new model so we did not know what to expect. We were like Columbus – we started without knowing where we were going; we just knew we were going on a voyage.”

Ten years on, the Foundation has been so successful that the UN has urged Turner to continue his support, and to establish the Foundation as a permanent institution, operating side-by-side the UN.

Invigorated by its achievements, the UN Foundation is raising its ambitions, including stepping up its work on tackling climate change, which, says Turner, “will require a huge co-ordinated global effort”.  He continued, “The Foundation’s future is tied to the future of humanity; I hope that we both do well and prosper.”

The Foundation also is seeking to make itself more sustainable, by establishing an endowment and expanding its strategic partnerships, such as with the London-based Fortune Forum, a network of wealthy and influential individuals investing their time and money to address the world’s most serious social and environmental issues. Turner was honoured at this year’s Fortune Forum Summit held in March. “We simply need more Ted Turners,” said Renu Mehta, the Forum’s founder.

The seeds of Turner’s philanthropy were sown long ago. His father, a businessman “of modest means” was a strong believer in supporting his community, and set up scholarships, anonymously, to help underprivileged kids to go to university. Then years later, when Turner was just starting out in business, he shared a table at a fundraising dinner with another businessman who told Turner of the joy he experienced as a youth in being involved in the family foundation set up by his father.

Turner recalls, “His experience resonated with me, and I decided then that if I were ever to become rich I would endow a family foundation and involve my children. And it has been a wonderful experience.  It brought the family together; we learnt compromise and about philanthropy, and had a lot of fun doing it.”

In addition to his family foundation, Turner’s philanthropy includes the Captain Planet Foundation, which helps children to make a positive impact on their own lives and the health of their communities; the Turner Endangered Species Fund, which works to conserve biodiversity by emphasizing restoration efforts of endangered or imperiled species on the Turner properties (Turner is the largest private landowner in the US); and the Nuclear Threat Initiative, a foundation he co-chairs with former Senator Sam Nunn, which works to “close the growing and increasingly dangerous gap between the threat from nuclear, chemical and biological weapons and the global response”.

“Philanthropy is the best thing I ever did,”Turner says, and encourages aspiring philanthropists to get engaged: “As seen in the current recession, you never know how long you will have your wealth, so give it away while you can. Think big or think small, but think, and then take that first step – it is a wonderful adventure.”