GiveBLACK, is the brainchild of four UK-based Black women in senior leadership roles in the arts, education and business. Althea Efunshile CBE, Yvette Griffith, Patricia Hamzahee FRSA and Sue Woodford-Hollick OBE aim to galvanise Black philanthropy as an intentional source of support for organisations serving Black communities and advocating for racial justice and social change. They have collaborated with UCL Culture to publish Britain's first ever report into Black philanthropy and charitable giving, which was published on 26 July 2022.

‘Valuing the Black Philanthropic Pound’, a study produced by GiveBLACK, in partnership with UCL with research conducted by VSA associates, draws on an evidence base of focus groups and interviews held with Black donors, including high net worth individuals, and Black-led charitable organisations. The report is funded by Arts Council England, the Hollick Family Foundation, the Paul Hamlyn Foundation and the Young Vic.

Black Britons have a strong history of giving and volunteering through churches, mosques and other community organisations, as well as a tradition of supporting extended family members in the UK and beyond. Yet, except for a few widely publicised individual acts of philanthropy by Black celebrities such as Marcus Rashford and Stormzy, Black giving in Britain has remained largely hidden until now. With continuing disproportional social and economic impacts on Black communities, this is a timely study.

GiveBLACK wanted to examine the extent and focus of Black giving in the UK and understand what ‘giving back’ means to the Black community. The report also seeks to galvanise identity-based philanthropy by ensuring Black donors are recognised as a vital source of financial support for Black communities and wider society.

GiveBLACK co-founder Patricia Hamzahee says, “Britain’s Black communities are seen primarily as recipients of charitable giving rather than as donors. While charitable and social organisations serving our Black communities will continue to need national and local government support, as well as funding from a broad section of corporations, trusts and foundations, it is also essential to wield the influence that helping ourselves delivers.”

One of her fellow co-founders, Yvette Griffith, says, “It is about Black people from every background pooling their resources. If every individual who identifies as Black donated just £1, there would be over £2 million to support the needs of our communities. When this is combined with more substantial gifts and donations from others who want to contribute to these priorities, a substantial source of funding can be catalysed.”

In the research interviews, high net worth Black donors spoke passionately about their strong desire to empower the Black community and create opportunities by donating money or giving their time, for example as mentors, advisors and trustees. Many of them see championing education as a particularly effective way of overcoming disadvantage and breaking the cycle of poverty.

Another important finding is Black-led charitable organisations’ belief that they are often overlooked and excluded from applying for large sources of funding. Black fundraisers also fear that the increase in giving to Black community organisations that followed the recent high-profile Black Lives Matter movement will not last as the glare of publicity fades.

The report notes that the current lack of visibility within Black philanthropy is highly problematic for both donors and fundraisers. While many wealthy Black donors feel driven to support underserved communities, they need a reliable vehicle to help them connect with worthy Black causes and to network with each other to increase their impact. Black-led charitable organisations need to be able to engage with potential Black donors and learn how to communicate with them effectively. The creation of a foundation for Black philanthropy to meet these needs is one of the report’s key recommendations.

According to the 2011 census, over 2 million people in the UK identify as Black and this will surely increase with the 2021 census.  The report’s authors conclude that the collective generosity of Black Britons – if harnessed and channelled appropriately – has the potential to play a major role in addressing social injustice.

Following this publication, GiveBLACK will convene Black philanthropists, community organisations and fundraisers to promote, share and discuss the report’s findings and recommendations as widely as possible.

A second phase of study will then be undertaken, including a nationwide survey of representatives of the Black community from a wide range of socio-economic backgrounds.

The full report can be viewed here ‘Valuing the Black Philanthropic Pound – Patterns and Motivations for Black Giving in Britain 2022’. If you would like to know more about this report, or get involved in the project please contact zofia.sochanik@philanthropy-impact.org for more information. 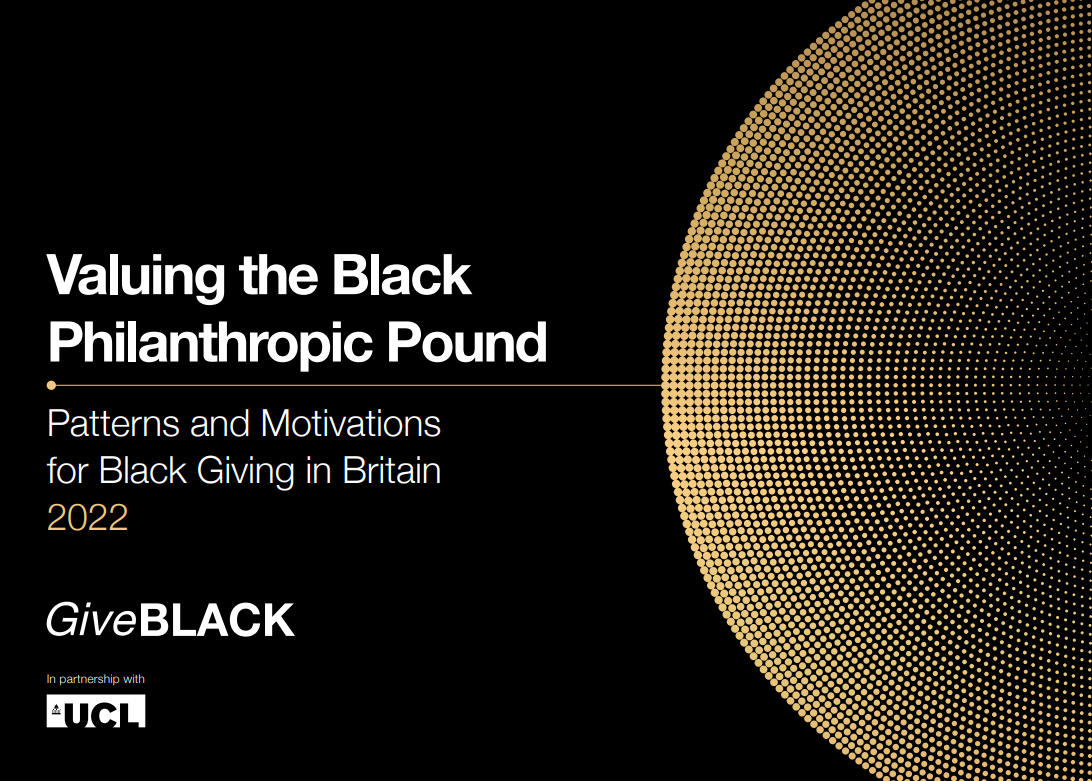