Wealth and the Will of God: Discerning the Use of Riches in the Service of Ultimate Purpose (2010) 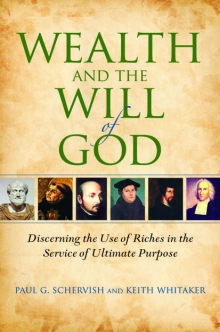 The explicitly religious title of this book will no doubt attract as many readers in the US as it repels in the UK. But in fact neither should be unduly influenced by the promise or threat contained in that title. Like most of Schervish’s prolific output, this book is a reflection on the right use of wealth rather than a religious tract.

The authors set out to show how wealthy people can marshal their resources in line with their moral compass and ‘ultimate purpose’, and is therefore as relevant to people who might describe themselves as broadly spiritual or generically moral, as it is to card-carrying Christians.

Whilst religiosity is probably an optional factor amongst the book’s key audience, wealth is not. Schervish has made a life-long study of the wealthiest Americans, with a focus on how this tiny but growing minority can accommodate their substantial resources within a ‘moral biography’. Despite stating on the first page that, “individuals from any economic or social position may construct a moral biography”, the authors’ interest is clearly focused on those they label ‘hyperagents’ – people who possess sufficient wherewithall to be beyond personal economic necessity. The defining characteristic of hyperagents is that they can shape the world rather than just live in it, and the ‘institution-changing capacity’ of significant wealth holders includes their ability to define and shape charitable activity, rather than just join in with others to fund the causes they care about, as is the lot of the non-wealthy.

Whilst being an uber-rich, world-shaping hyperagent sounds attractive, the authors disagree: “Liberation from economic necessity… is not always easy. Wealth holders find it challenging to read the moral compass that will guide them… They worry over how their riches will shape their own moral biographies and those of their children… Acquiring wealth, it turns out, is the beginning, not the end, of a moral biography of wealth”.

The substance of the book then deals with the problems facing those who wish to be both wealthy and good. Six chapters consider, in turn, the contribution of six major thinkers, philosophers and theologians, exploring how their collective wisdom can help contemporary wealth-holders to work out how to align their financial capacity with their personal morals and ‘ultimate purpose’ in life. Drawing on some of the Western world’s weightiest thinkers from the past two and a half centuries - including Aristotle, Thomas Aquinas, Ignatius Loyola and Martin Luther – the book could easily slide into prescriptions from the past. But Schervish and Whitaker adroitly organise the material, showing its relevance to the present day, so that it becomes a useful guide to making more discerning and deliberative choices in the 21st century.

Indeed, the aim of avoiding prescriptions permeates the book. No particular morals or ultimate purposes are claimed to dictate any specific actions, and the authors are at pains to emphasise that there is no universal formula for the ‘correct’ use of riches. The main guiding principle, derived from the work of Aristotle, is the importance of making wise choices; though this advice is ambiguous at best as ‘wisdom’ is itself left undefined. Whilst there is no easy crutch to lean on that can dictate our decisions and actions, the authors insist we must remain alert “to the importance of choice and the need for some process of reflection, deliberation, or discernment that connects foundation with aspiration”. In other words: well thought-out philanthropy is always better than knee-jerk, reactive giving.

Despite this book being aimed at providing guidance to today’s wealth holders, it contains many interesting messages for others involved in the wider philanthropic sector. For example, fundraisers will be heartened to read that wealthy donors who take a more discerning approach to their giving are alleged to increase both the quantity and the quality of their giving. This is because the process of self-reflection provides donors with a more accurate understanding of their capacity to give, as well as a heightened awareness of the greater needs of others in comparison to their own needs and wants.

Whilst the thinkers discussed in this book span over two thousand centuries, the authors insist there are many common themes in their work, as well as much useful variety. For example, Aquinas’ argument that wealth poses challenges to its possessor, is echoed by John Calvin’s provocative declaration that money is a test rather than a gift. Some disparity is evident in Loyola’s teaching of indifference to money, which leads him to conclude we should neither embrace nor disdain riches, whilst Jonathan Edwards is more positive about wealth, claiming that money is good because it emanates from God. However, Edwards’ view of money as a social good, rather than an individual possession, is allied to Luther’s rejection of individual almsgiving in favour of communal support for those in need.

As can be seen from this briefest of summaries of the content, this book is essentially about the discerning use of wealth and how to draw on our common pool of wisdom to best conduct philanthropy in the 21st century. Most references to God could be deleted without substantially altering its meaning or point – and would likely increase book sales this side of the Atlantic!

Yet this book deserves to be read in the UK, not least because it takes an essentially optimistic approach to one of the big questions of our time: ‘How can thoughtful people connect their wealth to their spiritual aspirations?’ Schervish and Whitaker believe that the rich are seeking guidance on this issue, that they desire to be ‘financially moral’ and that the wisdom of the past can help the wealthy to make wiser choices today. As the number of billionaires continues to climb ever upwards (in both dollars and sterling, not to mention in rubles, rupees and renminbi), the question of how to reconcile financial success and moral fulfilment will become more pressing for a larger number of people, and we will need all the help we can get with addressing it.